Driving Ergonomics and what you need to know about!

Poor posture and driving ergonomics can lead to discomfort after a lengthy car ride, but in the long term its effects on your body are much more demanding. Over time of constantly sitting for prolonged hours, there’s an increased chance of developing postural distortions or compensatory patterns that will eventually manifest as

Other than musculoskeletal injuries, disc-related issues in the lower back and neck can also develop due to constant pressure placed on these body parts. The spine is a very complex structure that curves with time. If you spend long periods of time in flexion, your back will begin to curve and this can lead to not just chronic pain but also injury/damage if untreated. 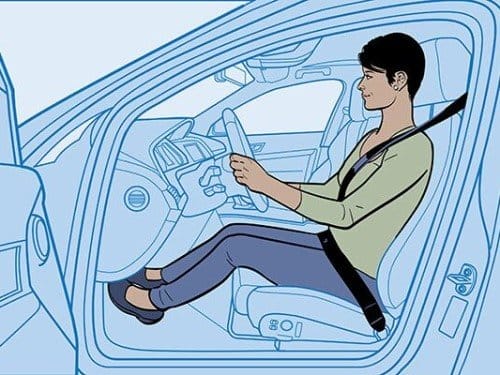 Another factor that can cause postural concern is the setting of the vehicle’s seating in a position that is not ideal for the driver’s body. For example, the low position of a vehicle seat, as well as an inclined backrest, may prevent the angles of the hips and knees from being in line. This concern has been noted as early as the 90’s when researchers started to notice that the vehicle’s seat design and driver’s sitting posture significantly affect the driver’s comfort. Specifically, ergonomically unfit seating positions exposed truck drivers to numerous health problems.

Similarly, a study conducted by Wilder et al, 2016 postulated the theory that the ergonomic design of truck driver’s seat is an important issue for the vehicle design engineers, as truck drivers usually spend over 2,400 hours on the road in a year. In addition, the seat dimensions and anthropometric measurements for nearly all truck brands and the existing seat dimensions were found to be inappropriate for truck drivers (in Bangladesh) and causing health problems. A study stated that seat discomfort was highly associated with low back pain.

Finally, changing gears in both manual (primarily) and automatic cars can also affect musculoskeletal issues in the shoulder and neck, resulting from the gear stick position on a single side. To accommodate this problem, the driver needs to adjust the chair to the ideal position in order to have the gear stick in a neutral position – neither reaching to a straight arm nor bending beyond 90 degrees. 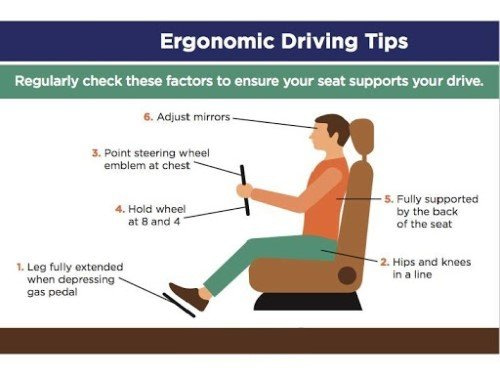 It is important to note that sitting ergonomics in a car and sitting on a normal chair are fundamentally different, in particular, due to the activities taking place. When seated in a car, the hands and arms are typically higher than when working at a desk. To operate the brake and accelerator pedals, the driver’s legs are farther forward. In some cases, one foot may be flat on the floor and the other at an angle to operate the accelerator and brake pedals, whereas for manual transmission, the other foot is on the clutch and one arm and hand are needed to operate the gear shift.

In addition to this, vibrations coming from the moving vehicle contribute stress to the lower back coming from the moving vehicle on an uneven or bumpy road surface and the body moves sideways when taking on corners. Depending on how fast the vehicle is accelerating or decelerating, there is a variable force that is exerted on the driver’s body. Of course, these moving forces are not present when working at a desk, causing very different challenges for the body.

As mentioned above, the physical factors experienced by drivers such as prolonged sitting, whole-body vibration, the ergonomic mismatch between anthropometric sizes of the driver and their physical environment, and even the type of vehicle seat increase the risk of developing low back pain.

Do you have Back Pain?

If you suffer from back pain and would like to engage Rehamed Therapy for your treatment needs, please contact our therapist team through Email, Whatsapp or through our website.

It is believed that when the drivers are passively sitting, the lumbar spine is poorly supported and may actually expose them to sudden injuries. The long working periods without adequate rest directly contribute to low back pain.  It has been found that driving more than twenty hours a week has a significant contribution to the high prevalence of low back pain and also to medical leave.

The risk of low back pain is higher when drivers work about 30-50 hours per week compared with drivers who work less than 30 hours. In fact, the risks are up to five times greater for those drivers who work more than 50 hours per week. This is particularly interesting given that other findings discovered that even driving more than 20 hours in a week has the possibility to lead to low back pain. It further showed that awkward bending and prolonged static posture have been reported to cause low back pain, as the static compression of the cells in the disks is linked to an increase in cell death.

In a survey conducted by Rehamed Therapy amongst its patients, we found that although almost one of every three people (29.7%) suffered from discomfort during driving, less than half (14.3%) of these ever sought treatment for such injury.

Interestingly, about 35% of respondents mentioned that they were aware of driving ergonomics, although it may be that a significant portion of these learned about it following their injuries.

With regards to their driving behavior, approximately 85% of those surveyed mentioned they drive at least every second day, of which 51% drive every single day. However, most people (about two-thirds) drove less than an hour per day on average which corresponds with the probability of driving pain-free, supporting the results that driving injury is proportional to total driving time. Finally, almost 90% of the patients surveyed mentioned they were physically active, which might be surprising given the relatively high discomfort rate (30%). This clearly further highlights the importance of driving ergonomics on overall health.

Do not make the mistake of taking Google’s word as scripture, consult a therapist now. If you want to know more about Driving Ergonomics, feel free to give us a call at 03-50315946 or send us a Whatsapp or Make an Appointment. We at Rehamed Therapy are always here to help!

Common Injuries as a Result of MCO/Quarantine Life

In this post, we are going to share with you what are the common injuries as a result of MCO/quarantine life that we all had to endure during the “Pandemic reign” over these past two years.

The benefits of Aqua Therapy rehabilitation

Aqua therapy has become a popular rehabilitation technique amongst physio- and sports-therapists. In aqua therapy, water becomes a therapeutic exercise medium. A pool is the safest environment to perform any exercise, due to the low impact…

What is Ergonomics (Human Factors)

As employee well-being grows ever more important, ergonomics is becoming a key focus for many forward-looking corporates. In particular, furniture companies (including IKEA) are incorporating “ergonomics” into their table and…

← Why you need a strong core for fitness and life

What is Ergonomics (Human Factors) →